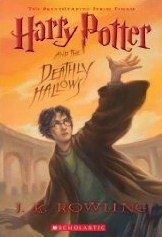 I just finished reading the four books in the Twilight series by Stephenie Meyer.  My daughter had been telling me for weeks that I would enjoy these books as much as she had, but I didn’t have any time for recreational reading until mid-May.  (see previous post for the reasons why!)  So I started reading them about four weeks ago, and I just finished the fourth book this morning.  I must admit that I enjoyed them more than I thought I would.  I’m in my mid-50’s, so I didn’t think I would be able to appreciate a teen-angst gothic romance, but the stories drew me in, and for the most part, I enjoyed the reading experience.

I was interested to see that the review clips printed on the book jackets compared the Twilight series with the Harry Potter series.  One of the reviewers said “Move over, Harry Potter!”  I suppose I can understand the comment in a certain light – this is a new series of books that has sold very well and caused a bit of media frenzy, has generated a movie franchise, and deals with magic or the supernatural.  From that standpoint, I can accept the comparison.  But when it comes to the actual text of the two series, they are very different – and in my opinion, the Harry Potter series stands head-and-shoulders above the Twilight books.

One important criteria for judging science fiction and fantasy is whether or not the author has created a believable and consistent world.  The world of the story does not have to obey the laws of the “real” world, but the internal logic must be sound, convincing, consistent, and fully described.  J.K. Rowling, the author of the Harry Potter series, created a marvelous and believable universe of magic that exists in parallel harmony with the real world.  She occasionally references aspects of the real world – the “Muggle” world as she calls it – as it collides with her fictional world of magic, and the interactions are played for humor as well as authenticity.  The magic works according to understandable physical laws, with limitations that are clearly explained without resorting to lecturing or other pedantic devices.

Meyer’s Twilight world similarly engages the “human” world, but less satisfactorily, in my opinion.  Her vampires don’t eat, don’t sleep, don’t breathe, and don’t really look human – their eyes change color according to their “thirst,” they are fantastically beautiful in spite of their paleness, and their skin sparkles brilliantly in the sunlight.  They never age and they possess superhuman strength.  Yet no one seems to notice this, except of course, for our heroine, who is immediately fascinated, rather than repelled, when she first encounters the vampire clan.  Much is made of the ways they “pass” in human society, especially in the fourth book, where our protagonist, Bella, becomes “immortal” herself.  Their hearts don’t beat, they can’t cry, and they can’t bear children, yet they obviously have some bodily fluids, because the handsome Edward manages to impregnate Bella in the fourth book.  Since she’s still human at that point, she is somehow able to conceive a child – a half-vampire, half-human child.  So apparently female vampires are barren, but male vampires can still be virile.  This is never explained.  There are other inconsistencies  and unexplained phenomena as well.

The Harry Potter books contain many examples of characters who struggle with moral choices.  Harry is sometimes tempted and often frustrated by the moral dilemmas he must face.  In fact, those moments are what make the books so compelling, in my opinion.  Good doesn’t just automatically win out over evil – Harry must choose to do good when it is often the harder or more dangerous path.  In the Twilight books, the “good” vampires have chosen to kill animals and drink their blood, rather than endangering human life.  As a result, they are never completely satisfied – they always feel thirsty, but they learn to live with it.  Because of their restraint, they are more compassionate and more able to feel love than their less-constrained counterparts.  But their respect for human life does not compell them to convert the other vampires they know.  In the fourth book, they host a large number of vampire guests who go out to hunt human beings – but we are supposed to feel okay about that because they all promise to stay away from the little town of Forks, where Bella’s family and friends live.  So how moral is their choice?

Those are just a couple of the things that bothered me about the Twilight books.  But what intrigues me the most is that I haven’t seen the same level of impassioned outrage from parents and the religious right regarding Meyer’s books.  When the Harry Potter books were first being published, I was a school librarian.  Parents at my school were in a constant uproar over Rowling’s books.  They believed that reading the books would make their children want to become witches or wizards, or at the very least would lead to a fascination with the occult.  Where is the outrage over Meyer’s books?  Not only does the protagonist, Bella, choose to become a vampire in order to be with her beloved, but she doesn’t suffer any of the consequences that she feared she would encounter – her pain during conversion is pretty bad, but she never gives in to her thirst to kill a human, and she’s even able to maintain contact with her father and friends.  In other words, the conversion to vampire is made to appear easy and attractive.  So why aren’t parents worried that their children will want to become vampires?  Are they unaware of the serious vampire cults that exist in California and other parts of the country?  Parents who were concerned that their children might want to learn magic so they can control people or the physical world should be equally concerned that their children might want to become vampires so they can be beautiful, fast, strong, and able to live forever.  Of course, there are no such things as real vampires, but there are no such things as real witches either – despite what those poor deluded Wiccans believe.  My only conclusion can be that these conservative parents must secretly believe in witchcraft more than they believe in vampirism – otherwise, where’s the threat?

Having said all this, I still enjoyed the books very much.  They were certainly entertaining, and kept me engaged.  When I finished the last book this morning, I felt a sense of satisfaction that all had ended as I had hoped.  Still, the reading experience wasn’t nearly as intense as it was for the Harry Potter books.  Harry’s world is so complete, so full of nuance and delight, and the characters are so completely realized, that I literally devoured the books as each one was published.  When the final book in Rowling’s series was published (two years ago), I took it with me to New Mexico on vacation.  On the fourth night of our trip, I stayed up reading until 4:00 a.m. because I absolutely couldn’t put the book down until I had finished it.  Then I spent another 30 minutes or so crying over the characters, the lives lost, the battles won, and the lessons I had learned from these fictional characters who felt more real to me than many of the people I know.  To me, there’s no comparison.

So what do you think?  Are the Twilight books better than the Harry Potter books?  Or does Harry trump Bella?  Let me know!

One thought on “twilight vs. harry”