A few weeks ago, I explained my appreciation for Raymond Nasher, who collected sculptures and exhibited them in his property, NorthPark Center, until the completion of his museum, the Nasher Sculpture Center. Since I’m working from a theme this week–art from Dallas–I thought it would be appropriate to include a sculpture from the Nasher Center. I chose one of my many favorites, Constructed Head #2.

The sculptor, Naum Gabo, was a Russian who had studied engineering and architecture, as well as art. The original version of this sculpture was much smaller and made of cardboard. Later, he enlarged it slightly and made a copy out of galvanized iron. This much enlarged version was completed in 1975, and is the only copy made of stainless steel.

In creating this sculpture, Gabo was responding to the work of the cubists, such as Picasso and Braque. He used his skill as an engineer to construct 3D versions of the “deconstructed” forms painted by these masters. Here and in Gabo’s later works, he aspired to achieve something contrary to traditional sculpture; his works make their mass transparent or translucent, instead of solid. In Constructed Head #2, we see the inner planes that would form a framework for the further development of a fully formed sculpture, but that is the beauty of this work. The inner planes reflect light, and the face and upper body that we perceive changes and reforms itself depending on the angle of viewing, as well as the time of day and source of light. 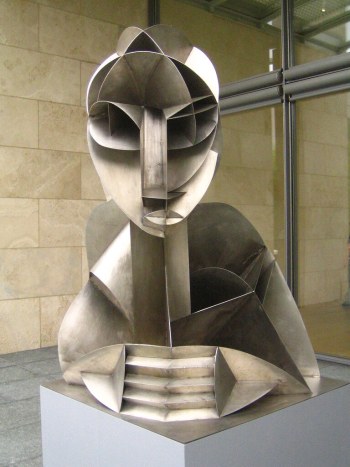 This is a very large work, measuring almost six feet in height (70 inches). As I mentioned in yesterday’s post, large works tend to control us as we view them, and this is especially true with sculpture, because our human bodies are implicated in our interaction with the art as we move around it from side to side. When I last visited the Nasher Center, Gabo’s Head was displayed outside of the main building, on the porch leading down to the garden.

This photo shows the way it was displayed when I last saw it. The glass panels behind the sculpture contain sliding doors that allow visitors the ability to move from the indoor exhibits to the outdoor sculpture garden. This was one of the many fun opportunities for selfies or group shots as people stood by the giant head for their “photo ops.” I believe it has since been moved inside, but one of the nice things about the Nasher is that their collection is always growing, changing, and moving around–so who knows where it will turn up next?

Many of Gabo’s later works involved the use of lucite or plexiglas along with nylon monofilaments, like fishing lines, that provided a structure that was translucent, and sometimes almost invisible. He played with concepts of mass and depth–concepts that other sculptors tended to take for granted. His work inspired many later sculptors, including Henry Moore and Barbara Hepworth (the subject of my last sculpture post), who added negative spaces to their works because of Gabo’s influence.

Gabo led a fascinating life. As a Jew, he left Bolshevik Russia to avoid persecution and settled in Denmark and then Norway during WWI. After that conflict ended, he lived in Paris and London, but after the end of WWII moved to the United States. He briefly taught architecture at Harvard’s Graduate School, and lived out his remaining days in Connecticut, dying in 1977. During his long and tumultuous life, he befriended and influenced many artists and sculptors, and wrote about his philosophies regarding the spiritual nature of art. So I close tonight’s blog post with a quote from Gabo regarding his philosophy of art: